There are characteristics and callings for our city that have grown out of our earliest days.  This week we will be praying for God’s purposes in these “roots” of our city to be fulfilled.  Each day we will leverage the history of a downtown building to guide our prayers (Reference). 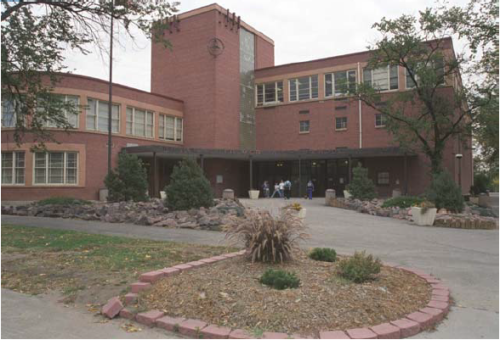 The Colorado Springs High School, now known as Palmer High School, replaced an unsound 1892 school building on the same site. It was financed in part by a Public Works Administration (PWA) grant. The building’s construction provided needed jobs and is representative of Depression-era public works spending. The building opened in September of 1940 as the city’s only high school. After a second high school was completed in 1959, this building’s name was changed to Palmer High School in honor of the city’s founder, General William Jackson Palmer.

The school is a good example of the Moderne style. When built, the magazine Architectural Forum praised the building for its lack of ornamentation.
Burnham Hoyt of Denver, who served as consulting architect, also played a
significant, perhaps predominant role in the design. There have been several additions. In 1954, four classrooms were added east of the Nevada Avenue wing. A detached Vocational and Industrial Arts Building was built in the northeast corner of the block in 1955. A new library wing was opened in 1999-2000.

This entry was posted in Education and Youth. Bookmark the permalink.